What are the Differences? Kindle E-Readers Explained

Whether you spend a lot of time on the plane or bus, you’re sure to get bored. Sure, you could bring along a couple of hard cover books, like the 630-page-epic [amazon_link id=”1451648537″ target=”_blank” container=”” container_class=”” ]Steve Jobs[/amazon_link], but it’s a couple of pounds that you’re carrying unnecessarily. With some pretty amazing E-Reader offerings from Amazon and Barnes & Noble, there’s almost no reason to carry around another physical book. 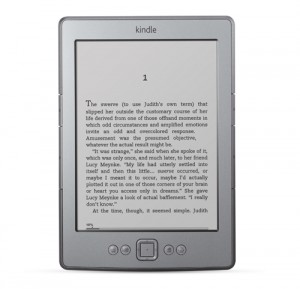 If you haven’t heard of the Kindle already, it is a family of electronic reading devices. On the majority of the slates in the Kindle family, instead of a traditional LCD, which is backlit and can harm your eyes if used for an extended period of time, there is a unique E-Ink display. This is great for reading because there is no backlight, and it looks exactly as if you were reading off a paper book. Another great feature of the E-Ink display is the low power consumption– instead of using electricity to power the display, it only consumes power when the page is changing.

The Amazon Kindle has been around a little while. The first generation device was a landmark in electronic reading devices. It had a great E-Ink screen and 3G access, which meant that you could download a book in tens of different countries– for free.

All of the Kindle devices, with exception of one, come with a couple of cool features. First, they can store audiobooks. With an integrated headphone jack, simply plug your earbuds in and hit play, and the Kindle will read the book to you. Audible.com has over 60,000 audiobooks ready for download on your Kindle. In addition to audiobooks, the Kindle can play MP3s, such as music, while you read. Simply plug the device into your commuter with the USB cable, and drag the songs over.

The Kindle devices don’t just do books: the Newsstand feature places magazines and newspapers, such as Time and The New Yorker, right into your hands. You can purchase a subscription right on the device and new issues are downloaded the instant they are released. 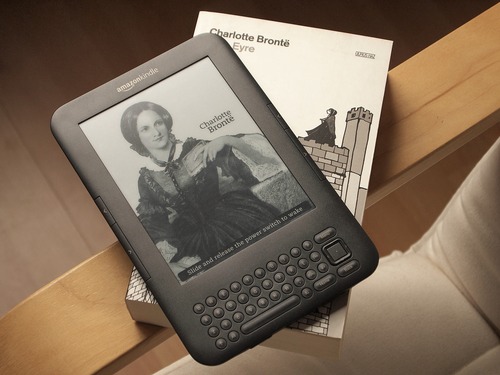 This is a Kindle classic— a 6 inch E-Ink screen, a full QWERTY keyboard, and optional 3G connectivity. Not only is a great reader, but it’s really cheap: as low as $99 for the WiFi only version. The battery life is phenomenal, and you normally will never have to think about charging the device. With the wireless connectivity off, as it will be most of the time, you can read books for about two months. It’s also really light: only a 8.5 ounces, and with the Kindle Keyboard’s 4GB of storage that can store over 3,500 books, you’ll really be able to take a lot of weight out of your backpack.

The Touch is a new addition to the family. Unlike the Kindle Keyboard, the screen covers the entire front of the device, which increases the reading area. And because there is no keyboard, it’s lighter by 12%. It can store the same 3,000 books and has both 3G and WiFi options.  Even if there is no physical keyboard, you’re not missing out– there’s still a on screen, touch keyboard to help you navigate through the Kindle bookstore. 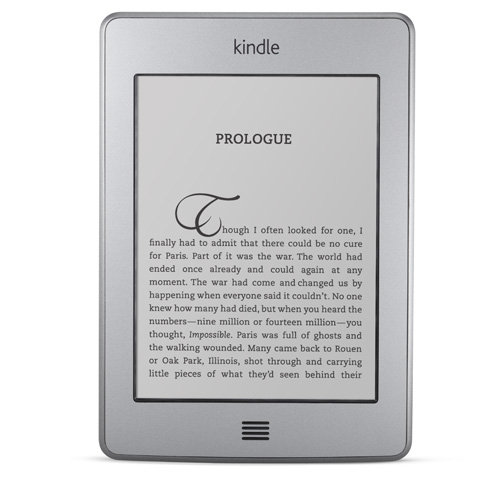 For the Kindle Keyboard and Touch there are a two options for wireless connectivity: 3G plus WiFi, or plain WiFi. If you opt for the cheaper, WiFi only versions, you will only be able to download books when connected to a WiFi hotspot. If you rarely download books, this may be fine for you– just download books when at home, work, or right before you takeoff from the airport with the free wireless access. But if you’re on the road and you run out of books, then you are out of luck.

This is the main advantage of the 3G version: if you are out and about, you can flip on the 3G wireless, browse the book store, download a book, and begin reading, all while you’re in the car or train. There’s no need for WiFi at all, but you still have the option of turning it on if you’re at home and downloading large files such as audiobooks. Not only do you get the 3G access in the United States, but you get free connectivity in over 100 countries globally as well. If you are a frequent traveler, the 3G is really convenient.

A hidden feature of the Kindle is the “Experimental Web Browser.” Basically, it will allow you to browse the web over the WiFi connection if you have the correct Kindle. If you are on the road and happen to be near a WiFi hotspot, and need nearby restaurants, you can simply pull up Yelp and find reviews on your Kindle.

When purchasing a Kindle, you may also notice the choice between “With Special Offers,” or without. Special Offers, in simple terms, are ads. They are only displayed on the screensaver if you have not touched your Kindle for a couple of minutes and on the home screen. They will never appear when you are reading a book. For some, saving $40 may be worth having these ads. In fact, some of the ads are actually good deals. For example, at one point there was a 25% off coupon for laptops purchased on Amazon.com– but you could only use the coupon if you had a Special Offers Kindle. Most ads won’t be useful: $30 off Yoga Classes, ads for AT&T, and $1 Kindle Books you don’t care about.

It’s up to you to decide whether Special Offers is worth the money saved, but if you purchase a Special Offers Kindle, you can always purchase an upgrade on your Kindle to remove the ads later. Remember, hardware-wise there is no difference, it’s simply whether ads are displayed or not.

At only $69, the “[amazon_link id=”B0051QVESA” target=”_blank” container=”” container_class=”” ]Kindle[/amazon_link]” (no suffix or nickname) is one of the cheapest, and most feature filled E-Reader. You get the same E-Ink screen, light device, and month-long battery life, but for a really low price. However, there is a tradeoff: there are no audiobooks, and the device can only store about 1,400 books. While you probably will never hit that limit, the lack of MP3 playback and audiobooks may be a deal killer for some. In addition, there is no touch screen or keyboard– just a D-Pad. While this is a great deal for the budget conscious consumer, most will prefer the Kindle Touch or Keyboard for $20 more.

The [amazon_link id=”B002GYWHSQ” target=”_blank” container=”” container_class=”” ]Kindle DX[/amazon_link] is a more specialized E-Reader. It’s huge, and much more expensive at $379. The DX comes with a 9.7 inch screen– as big as an iPad. However, it’s still an E-Ink display, so you get the same great outdoor reading experience. While it is big length and width-wise, it is still extremely thin. In fact, it is just as thin as the other members of the Kindle family. It also comes with free 3G access and can carry up to 3,500 books. If you don’t mind the bigger form factor and appreciate the large screen, the Kindle DX is a great device. But for casual readers who want a light, portable E-Reader, it may make more sense to choose one of the smaller Kindles. Unfortunately, the Kindle DX has been discontinued and can only be bought from third party vendors.

The Kindle Paperwhite is a new offering from Amazon with some pretty cool new technology. Embedded in the screen is a “frontlight.” Unlike a computer screen, where the backlight shines into your eyes, the light on the Kindle actually is reflected off the front of the surface. This makes the Kindle’s screen comparable to having a reading light on and will strain your eyes less. Best of all, you can turn the light off, and because the light is embedded into the screen itself, you’ll never even know it’s there. 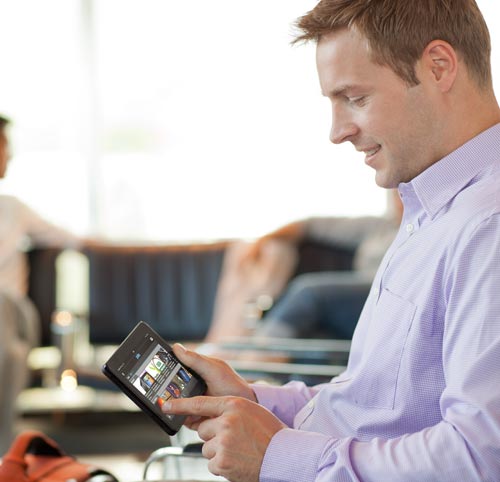 The recent addition of cheaper Kindles and the Touch are welcomed, but they all build on the same, standard E-Reader format. While there’s nothing wrong with this, there are some people who would prefer a radically different device.

This is where the Fire comes in. Unlike the other Kindles, and like an iPad, the screen is a full color LCD. While this may not be ideal for some readers, the Fire isn’t designed just for reading. In addition to the millions of books available on the Amazon store, you get access to 18 million TV shows, apps, movies, songs, books, newspapers, magazines, and more. The 7 inch IPS display is great for streaming movies from Amazon’s library, and magazines are simply beautiful, especially when compared to the black-and-white displas of the other Kindles. For the multimedia junkie, this the device.

Younger kids that love books make take to the traditional Kindle devices, but the Fire is great for children as well. During story time, simply bring up a full-color children’s book, complete with beautifully illustrated pictures.

With the device, you get one month of Amazon Prime. Simply put, Amazon Prime a subscription that includes streaming movies, free books, and free two day shipping on most items purchased from the Amazon store. If you buy the Fire, you will probably need (or at least really want) Prime due to the multimedia focus of the device. There are included apps for streaming the free movies included with your Prime subscription, and you can purchase rental rights for new releases. The Fire, based on the Android operating system, has email, Facebook, Netflix, Twitter, and a web browser. All of this for only $199– less than half the price of an iPad. This is the device everyone has been talking about– it’s a cheap tablet that actually makes sense to buy. Paired with the $80-a-year Prime subscription (only $40 for college students!), this deal is unmatched by anything from Apple, Vizio, Samsung, or any other tablet vendor.

There are a few cons when compared to the traditional E-Ink Kindles: it’s heavier, doesn’t have the E-Ink screen, and the battery life is much, much lower. These are tradeoffs that will have to be made for a device like this, because it isn’t really an E-Reader. It’s a lot more than that, and it’s something that any book worm or cinephile will absolutely love for the holidays.

One Response to What are the Differences? Kindle E-Readers Explained