The TI NSpire is the newest calculator from Texas Instruments, and OS version 1.4 is now available for download.

Among bug fixes, and some update to programming functions, TI has added in some new data collection features. 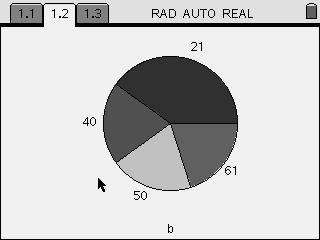 Pie charts are now able to be generated in the data/statistics application. Pie charts, as well as bar charts, can be created by forcing either the “X” or “Y” variables to be categorically displayed. This is a completely new feature for the TI NSpire, while previously, only histograms were accessible.

New to version 1.4 is smooth transitioning of the graph points. While changing plot types, the dots will “glide” over to their destination, instead of just reappearing.

In the new operating system, you may now connect Vernier EasyLink and Go! Link data collection modules to the TI NSpire, and receive data for your graphs and plots. 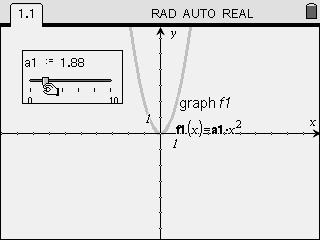 No longer do you have to deal with entering numbers, thanks to the new sliders that are integrated into OS 1.4. These sliders can be placed anywhere on a graph, and allow you to change variable values on the fly. The knob on the screen shot to the right can be dragged to either the left or right, changing the curve of the non-linear line.

Previously, the TI NSpire was only compatible with Windows XP and Windows Vista. Now, Mac OSX users can get in on the fun with the new link software and OS compatibility updates.

All of these screen shots have been taken by the TI NSpire Computer Link software, which was connected to my TI NSpire. Most of documents open in the screen shots are included with the OS upgrade as examples.